A selection of recent reviews and media mentions. Click on the quote or image for the full review.

‘Anne Corlett isn’t detailing a biological plague, but a personal one, tumbled on the rocks of personal history. It was lovely to walk this last beach, at the end.’

‘In a sea of dystopias, Anne Corlett’s sci-fi debut is a refreshingly intimate, hopeful take on the post-apocalyptic genre.’

‘The Space Between The Stars is – for me, at least – this year’s Station Eleven. I have seen more critical reviews, but it spoke straight to my heart and unstrung it.’

‘The Space Between the Stars is thought provoking, in ways that will have you thinking about what it means to be a member of the human race long after you have read the last page…definitely a worthy addition to your summer must-read list!‘

‘The Space Between the Stars is Anne Corlett’s first novel. It is a striking effort that explores life, death, love, isolation, and the search for meaning in an uncaring universe, and one that treats these topics with a surprisingly accomplished touch.’

SFX magazine has given The Space Between the Stars 4 stars. 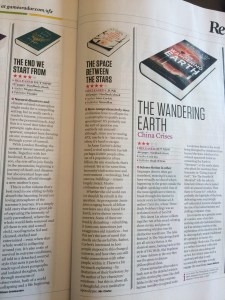 ‘Anne Corlett’s novel The Space Between the Stars deals with a woman travelling back to Earth to search for her lost love after a virus wipes out most of humankind.’

‘This is going on my favourites shelf and I don’t do that often. Recommended. Highly.’

‘This was one of these books that traps you with a matter of paragraphs, literally a page in to this beautiful sci-fi I knew I was going to love the story that was unfolding before me.’

‘Four stars for Corlett. This was a great read.’

‘I loved that this book pulled me in and made me feel so involved in its mesmeric story line. You will crisscross along an emotional gamut rarely found in sci-fi books to the point your thoughts become intertwined with those of the characters leaving you to wonder what happened as if their journey didn’t end when you closed the book.’ 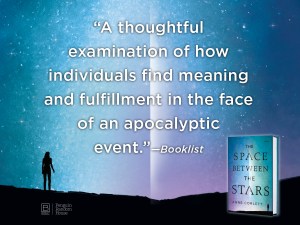 ‘Science Fiction often includes grand, far-reaching ideas, and Corlett has no issue touching upon some very interesting points, but does so by using her characters as a lens through which to focus these ideas, meaning that, not only are the ideas and issues raised here conveyed well, but they also form part of a plot which is involving, intimate, and often rather gripping.’

A rather lovely video review from Katie Lumsden of the Books and Things Youtube channel.

And another from Cheyenne Shaffer of the Novel Insights book channel.