Since yesterday was flying ant today I thought I might post a short story of mine that took third place in the HE Bates short story competition last year. 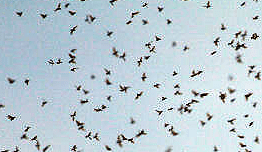 The Look of Leaving

Lots of things happened that summer, most of them blurred and worn by the slow, inevitable slip of tomorrows becoming yesterdays, and yesterdays sliding away into once upon a time. The only memories that have remained clear and sharp are the ones from the day that the ants flew.

It was hot that day, with the kind of heat that slices off the paving slabs and shatters into a thousand shards on your skin, making you understand all that stuff about refraction that the physics teacher droned out while you fiddled with the gas-taps, and counted heartbeats until that moment when the bell would crack the tedium.

The grass had dried into prickles, and my baby brother, Edward grizzled and didn’t want to crawl on it. I was kicking my feet against the side of the garden table, and listening to the low, one-sided drone of my mother’s resentment, rattling at the kitchen window, like one of those fat bluebottles that always seemed to think that an upside-down death on the windowsill was a small price to pay for a few illicit moments inside. I don’t know what they thought we had in there that was worth dying for.

‘Come and see this.’ Alice was leaning over the rockery, up on her toes in her pink flip-flops, the ones I hoped to inherit next summer, when a fresh wave of elder-sister privilege had carried her on to something new.

‘What?’ I made no attempt to move. The noise from the other side of the window had dropped to a low murmur, occasionally punctuated by something that sounded like someone crying. Not like Alice cried – all open mouth, and heaving chest, glancing sideways to check that everyone was watching. Not like Edward cried, either – puff-cheeked and oozing with the unstoppable force of his misery. More like I cried when I didn’t want anyone to hear, trying to swallow down the sobs before they made it out where other people could hear them.

Reluctantly, I squirmed down from my seat and cat-stepped across the sweltering patio.

At first I thought it was a heat-haze. The stones, the leaves of the scrubby plants, the sprinkle of gravel, they were all shifting, like water, or smoke. As I stared, the blur resolved itself into a thousand tiny, moving pixels. Grey, pearlescent wings quivered and shimmered, as one by one, the flying ants took to the air, gliding away in a steady stream, arrow straight and never looking back. On the ground, their landlocked brethren swarmed and circled. I couldn’t tell whether they were happy to see the flying ants taking off, or whether they were frantic, their non-stop movement an attempt to write some message.

I backed away. ‘What are they doing?’

‘They’re leaving,’ my sister said. ‘Going off to start new nests somewhere else.’

‘Will they come back?’

She shot me a scornful glance. ‘Why would they?’

I shrugged. Ants weren’t my field of expertise, although they suddenly seemed to be hers. I contemplated whether there was an insult to be constructed out of this.

I was interrupted by a noise from inside the house. It could have been my mother shouting, but it had an odd edge to it, a rising twist, and it was suddenly cut off by the slamming of a door.

A few seconds later, my father emerged from the house, dragging a suitcase.

He didn’t look. As he walked down the path, tiny wings shimmered against the sharp yellow of his hard-shell case, as disorientated insects bludgeoned themselves to a primary-coloured death. Perhaps they thought he was the sun.

My mother was at the kitchen door. She shouted something, but her voice was distorted, crumpled like her face, and I couldn’t make out the words. My father didn’t look back.

Alice was standing up now, staring between the two of them, the ants a forgotten halo around her head.

‘Dad?’ she said. And then she said it again, not a question this time. ‘Dad.’

My father still didn’t turn around. As he reached the gate, he had to let go of his case to wrestle with the lock he’d always said he was going to fix. Whenever my mother asked him to do it, afraid of Edward getting out onto the road, my father had got angry and shouted that she never gave him any peace.

On the lawn, Edward began to shriek, a thin, high-pitched scream, much sharper than his usual splodgy wail. My parents didn’t seem to notice, and Alice seemed frozen in place, like one of the animals in The Lion, The Witch and the Wardrobe, turned into stone by the winter magic of the evil queen.

I was the one who went to Edward, the grass spiking at my bare feet. His legs shifted and blurred as the ants swarmed over his soft white skin. I danced with him, a frantic, jagged quick-step, swiping at his legs until the insects were all gone, leaving only a brush of angry red blotches, and a swell of plump tears on his plump, upside-down clown face.

My father had finally managed to force the gate open, and he was dragging his case along the road, its wheels snagging on the uneven paving-stones. I watched it all happening as though I was a long way away, a tiny version of myself peering through the wrong end of a telescope. The hiss and glisten of the flying ants was all I could hear, although I knew my lips were making the soothing, shushing shapes my mother always used to quiet Edward when he cried.

As I stood there swaying, with my brother in my arms, the hot, ant-speckled air pressed hard against my skin. I wondered if this was how leaving always looked.

A shimmer, a bite, and then a long, straight line of never looking back.