So I finally got round to going to see The Last Jedi yesterday. I took boys 1 and 2, who saw it when it first came out. Amazingly, they had somehow managed to overcome their need to verbalise every tiny little thing that enters their heads (usually more than once) to avoid spoilering me. And to give them due credit, they managed this despite two days in Disneyland Paris, involving multiple Star Wars themed activities, some of which directly referenced the most recent film.

Clearly this had been an enormous strain on Boy 1 since, during the film’s climactic moments, he poked me in the arm and announced ‘Did you know that’s not actually Luke Skywalker? It’s just his ghost.’

He seemed slightly startled by my strangled shriek of ‘No! I didn’t! WHY WOULD YOU TELL ME THAT?’

To be fair to the boy, he had a point. It wasn’t the point he thought he had, but it was a point, nevertheless. If he’d given it another couple of seconds, I probably would have known.

It was the footprints.

Or rather, the lack of footprints.

The film’s final battle was set on a planet with a fairly strange surface – white salt over what seemed to be some sort of bright red gravel – the ultimate purpose of which appeared to be to allow for one of those momentswhere the audience goes ‘Aaaah’ and nods knowingly at one another. By the time Kylo Ren and Luke Skywalker faced each other, lightsabers at the ready, we’d already had one close-up of the red footprints and a comment about the salt from a random rebel. We were clearly supposed to have absorbed the fact that people were leaving red footprints on a white surface. Then we had the actual confrontation, with lingering camera shots of Kylo Ren shuffling his feet and scraping away the white crust. By the time SpoileyMcSpoilerface piped up with his big reveal, I was starting to wonder what the deal with the salt actually was.

No footprints = force projection, obviously, with the real Luke Skywalker perched on a rock on his Jedi island, about to watch his final sunset.

As the film’s last moments played out, my main thought – apart from I am never coming to the cinema with you again – was how easy it is to seed those sort of hints in film or television, compared with the challenges of doing the same thing in a novel. 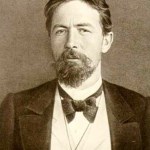 amously commented If you say in the first chapter that there is a rifle hanging on the wall, in the second or third chapter it absolutely must go off. If it’s not going to be fired, it shouldn’t be hanging there.

I’m not entirely sure I agree with this. At least not as an absolute rule. If the world of your story is filled only with things that serve a specific plot purpose, then not only is there the potential for your setting to finish up extremely bare and lifeless, but it also means that those hints stand out like great big sore thumbs with flashing neon signposts pointing straight at them. If your protagonist walks into a room and notices only a rifle hanging on the wall, your readers’ attention is going to be focused directly on that rifle. Later on, when the rifle is fired, they are likely to be thinking ‘Oh, here’s the shooting bit’ rather than ‘Ooh. Gun. Bang!’ or words to that effect.

If, on the other hand, the protagonist walks into a room with a rifle, a stag’s head and a pair of stuffed ferrets, they are going to notice the gun, but the neon signs aren’t going to be flashing quite as brightly. They might think the gun is an omen of things to come. Or they might think they’re just being told that the room belongs to a fanatical hunter, or that the décor has been chosen by someone with particular tastes.

This sort of seeding is something that I’ve heard many writers talking about, and everyone seems to find it quite tricky. It has to be done, otherwise the reader can be left feeling blindsided by a big reveal that seemed to come out of nowhere. I’ve certainly read books where I’ve felt that the writer ‘cheated’ by appearing to set up a particular kind of resolution, before revealing that it was all a plot by evil alien overlords, or that the murderer was a character who had only put in the most fleeting appearance in chapter two. Often these books are marketed with a slogan along the lines of ‘the twist you’ll never see coming.’

But that’s not always a good thing.

No, you don’t want to figure out the entire plot, along with every tiny nuance of the whodunit reveal, but I think you do need to have a sense of ‘Oh yes, that’s what that was about’ rather than ‘How the bloody hell was I supposed to know that?’ The reveal needs to be justified by clues scattered throughout the text, even if they only make sense with the benefit of hindsight.

Every writer will no doubt work out their own way of dealing with this challenge, but I’ve come up with a few thoughts.

*Disclaimer – the examples are ridiculous and not something I would actually consider incorporating into my current project.

**Double disclaimer – not unless I get really, really desperate.

So to summarise, if you say in the first chapter that there’s a rifle hanging on the wall, it may or may not need to go off, and if it does go off, the reader needs to be both surprised and at the same time not surprised.

The gun, while hanging on the wall, is in a state of both going off and not going off, and the reader won’t know which is the true state until the relevant chapter.

At this point I should probably admit that I have massive issues with the whole Schrödinger’s Cat thing. I have had various discussions about it with my more scientifically-minded partner. In the interests of full disclosure, my position is that the damn cat is alive or dead. Not both. You just don’t know which until you open the box. And no amount of ‘yes but quantum’ is going to change my mind. We now try to avoid talking about science stuff when it comes to my writing. As discovered during the writing/editing of The Space Between the Stars, there is nothing more annoying than discussing spaceship landing systems with someone with an aeronautical engineering degree, who doesn’t have to figure out how to shed 30,000 words from a 140,000 word manuscript.

Anyway, to sum up my Chekhov-Shrodinger and his dead/not dead cat-gun theory, I think it comes down to making sure that everything on the page serves a purpose, while obscuring the nature of that purpose till the last possible moment. In The Last Jedi, there was a lot of stuff going on in the run up to the Ren-Skywalker showdown. If the pair of them had just walked out to meet one another on a pristine white surface, with no fighting or escaping or exploding, it would probably have been almost impossible to miss the single line of footprints. As it was, it went something like…Oh look. Salt. Speeders. The striking spectacle of scarlet plumes. Boom! Kylo Ren angst. Luke and Leia emotional moment. Speeders. At-Ats. Boom! Salty footprints. Run away! Run away! Salty footprints. Hang on a moment…BIG REVEAL!

Or, as in my recent experience…Salty Footprints. Hang on a moment…IT’S NOT REALLY HIM, MUMMY! (And incidentally everyone within a ten seat radius) IT’S A GHOST!

I do think that novel writers can often learn from watching screenplays.

In this particular case, I learned never to go to the cinema with an eight year-old with a chronic case of mouthflap.