Everything I know about plotting I learned from Ikea flatpack furniture…

So far, my maternity leave has involved more furniture assembly than I anticipated. Somehow it always seems like a good idea right up to that moment when you realise that none of the three hundred unidentifiable pieces laid out on the floor bear any resemblance whatsoever to the pictures in the sixty-five page instruction booklet. My most recent moment of flatpack revelation came while trying to construct two chests of drawers for the boys’ bedrooms, as part of an attempt to get everyone settled in their own rooms before Boy Number Three put in an appearance.

The sleeping arrangements in our house had turned into something resembling one of those sliding puzzles, where one square moves and then another one moves into the resulting space, and somehow you finish up going round and round in circles without actually getting any closer to the solution. Thomas started off in one room in a single bed. When he got bunkbeds, so that he could have friends to sleep over, Ben promptly moved himself into the free bunk. The bunkbeds finished up being moved into Ben’s room to free up space to play in Thomas’s room.  Thomas then moved in with Ben, before getting fed-up of sharing and decamping to the spare bed, only for Ben to make repeated attempts to join him in there. We decided to re-decorate in the hope that they might actually want to stay in their own rooms. Hence a trip to Ikea and subsequent flatpack furniture frenzy.

I generally find that there is a point in the furniture assembly process, usually about an hour in, when a kind of altered consciousness kicks in. I imagine it’s similar to what would happen if you were to ingest large quantities of mind-altering cactus-based substances. There are random trains of thought.  Odd ideas about irrelevant things like cheese, or socks. Maybe the occasional mild hallucination.

of the plotting issues I’ve been having with my new novel. I should probably make it clear that I am always having plotting issues. If I’m not struggling with a plot point, it just means I’m not actually writing. I keep thinking there will come a time when I can sit down and draft a whole plot summary, safe in the knowledge that I will stick to it, and not descend into a pit of panic and doubt, from which I will attempt to claw my way out by adding all sorts of random and unnecessary sub-plots and unbelievable twists, and the occasional entirely two-dimensional character who has no purpose beyond facilitating a single conversation or meeting which will make some unlikely happening fractionally less unlikely.

For example, at one point there was an extra character in The Space Between the Stars. He was called Davy and I quite liked him, right up until the moment when I realised that his sole purpose in the book was to die and make the other characters feel sad about it. At the point I realised this, he’d just wandered into a room on his own. He never came out of that room again. A streamlined, Davy-free first draft rolled on without him. No-one seemed to miss him. None of the other characters ever said ‘Hey. Anyone remember Whatsisname? What happened to him anyway?’

And then, about three chapters from the end, I had one of those IDON”THAVEENOUGHPLOTINEEDMOREPLOTMORESTUFF!MOREDRAMA! type crises of confidence, and reinserted Davy.

Except he was called Ciaren. And he had somehow got himself out of the room.

Into a vegetable patch.

For a good half-chapter he got to wander about, enjoy the sunshine, occasionally even talk to people. And then I had another panic. He still had no obvious purpose beyond the whole dying dramatically thing. I left him in the vegetable patch and trundled on without him once again. He wasn’t quite beaten, though. A chapter later he made a last, brief come-back as Alec, who loomed up out of the dark in order to impart a piece of information that would have been blindingly obvious to the other characters about five seconds later, if they hadn’t been delayed by the whole looming and imparting thing. The delay was probably compounded by a whispered off-page exchange along the lines of ‘Who was that chap? He looked awfully like Whatsisname. Oh yes, Whatsisname.  Did we ever figure out what happened to him?’

That’s fairly typical of my plotting process. It usually involves large pieces of paper with timelines, and flowcharts showing who knows what about who at any given time, and multicoloured lines radiating from incomprehensible Venn-diagram-like doodlings.

And in the middle of the chest of drawers construction, it occurred to me that plotting and flatpack furniture have an awful lot in common…

And then you’ll finish up going all the way back to Page 2. Probably while weeping quietly.

And then you’ll get to the next page and realise that dowels 2, 3, 4, 6 and 8 really didn’t need to be in there. But now they won’t come out again. You’ll try pliers, but one of the dowels will snap off and get stuck forever in a hole that’s actually intended for one of the smaller Right-Angled Foozlebubs.  You’ll try crowbarring them out, but they’ll splinter and
bend sideways.  You may resort to using your teeth, but I promise you this won’t end well. You’ll probably finish up leaving the splintered remains of at least two dowels in there, while you press on, desperately hoping that no-one will notice that the side is only attached to the base in one place, instead of six, and if you prod it too hard the whole thing will come crashing down.

You will never, ever figure out the point at which that should have happened, no matter how many times you go back over it. But clearly it was in there somewhere, because by the time you get to page sixty-three, there is no way you can possibly reach the aforementioned Winged Flanges to tighten them up, because they are buried beneath several structural layers and blocked by half a dozen Foozlebubs. Getting to them will probably involved going back and extracting someone called Davy from a hole that should have had a dowel in it, if the dowels hadn’t all been used up in the spaces that should have been occupied by three of the four Extra-Large Right-Angled Foozlebubs. You will finish up taking the whole thing apart and rebuilding it, pausing at every step to see if this is an appropriate moment to tighten the Winged Flanges.

And then you’ll get to the final page and realise that you can’t actually open the drawers. And if you do manage to prise them open, you can’t use them, because they’ve been Upcycled and Hacked to the point where they no longer resemble anything intended for the storage of actual clothes. You will try to undo the superfluous steps, but sooner or later you will give up and resign yourself to starting again, with a brand new flatpack, and this time Leaving Well Alone.

Maybe plotting isn’t like this for everyone. Maybe my mind has been turned to mush by the trauma of assembling two chests of drawers, a shelving unit and a trundle bed while nine months pregnant. But I do think that budding writers could learn something from the Ikea flatpack process. Even if that ‘something’ is as basic as ‘if at first you don’t succeed, try, try again.’

Or ‘always check whether any given hole is for a dowel or a Right-Angled Foozlebub.’ 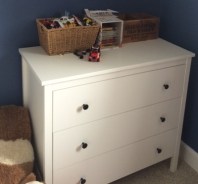 The rooms did get finished, incidentally. And just in time for Boy Number Three’s arrival. Everyone is currently sleeping in the wrong rooms to accommodate night-wakings.

That was all worthwhile, then. 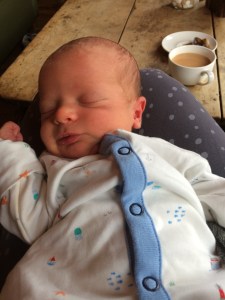